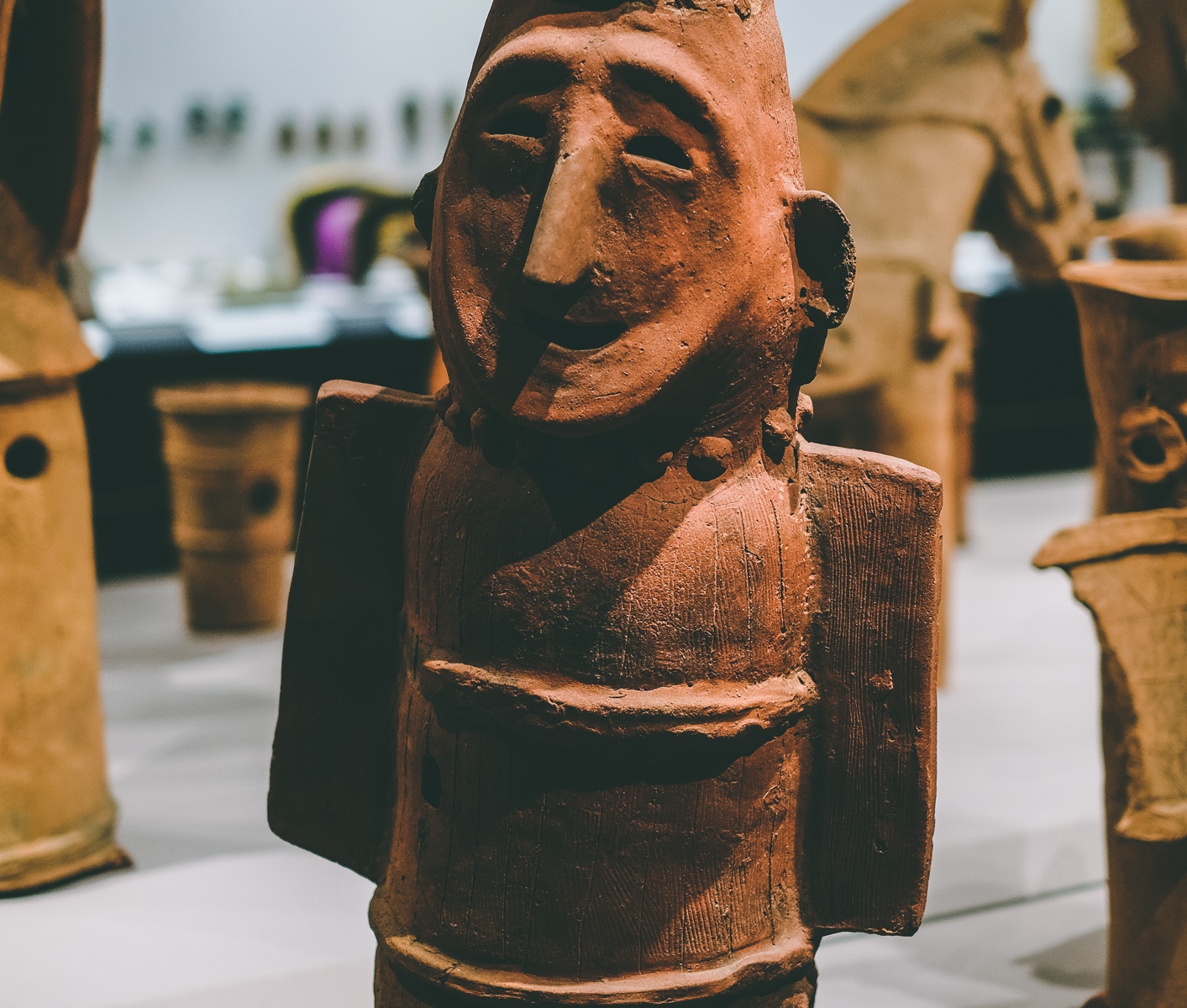 We saw the banners and we saw the posters. Some odd looking clay figures and pots that look deceptively simple. 10000 Years old prehistoric art in Japan. Even though we had not planned a visit, we had to see it; which was the best thing about a long trip: space for unplanned events and exploration!

If you ever have the chance to see it yourself, go for it! We saw the exquisite Dogu figures which resembled to little gingerbread people 🙂 (for more information Wikipedia) as well as many more interesting arts and artifacts in the complete collection of the museum.

Erhan’s note: From a game developer’s perspective, the Jomon period explained almost the entire history of Japanese game art and where most of their inspiration came from (especially the mainstream ones such as mario, zelda series etc.). It was especially surprising for me since I would have never thought to see the roots of digital art in a museum featuring 10.000 year old artifacts. In retrospect it makes total sense.

The rest of the collection was worth visiting too. Having been exposed to classical western and to a degree islamic classical art for the most part it was amazing to see what kept the Japanese inspired and busy through the ages.

Even though it seems from the photos that Erhan is defiling and pillaging the ancient artifacts like a hapless giant who hopes his wanton destruction goes unnoticed, these were only interactive parts of the exhibition, which made it more interesting.

Erhan’s note: The 4th picture looks totally like it is from a Mario game.

Of course we were not the only ones who spent the afternoon to avoid the sun, as always there were lots of people enjoying the AC and some even relaxing in the cool air of the museum by sleeping on the benches (during the journey we learned by experience that this behavior was totally normal for Japanese people).

For lunch, we saw some food trucks in front of the museum, we took some food and found some shade.

Erhan’s note: This is where we ate our first curry and rice in Japan. II have to say it was not good. Mostly because it was from a food truck in front of a museum under sweltering summer heat. I have to admit I thought all Japanese curry had to taste amazing for some reason. I blame Ghibli animations.

After the museum, we continued to walk in the park and saw Tokyo University of Arts. Giving in to our curiosity, we walked in, (usually entering university grounds is a big issue in Turkey and prohibited or entirely regulated by private security) and had a lovely time in their outside cafeteria. Watching colorful characters of students and staff, and seeing the university life was an interesting experience that not many tourists get to enjoy.

Erhan’s note: This statue by Rodin (more about it here), standing in the garden of the Tokyo University of the Arts, drew my attention. People who are familiar with Japanese manga, anime, and otherwise popular culture are probably aware of their comically effeminate yet perfectly proportioned male figure trope. I thought it was just a quirky comical effect found in popular culture references. A way of poking fun at western idea of human perfection. It was a welcome shock to see it in the bronze in front of me on a park near the university grounds. Although many such casts exist out there across the world, this statue had such a stark contrast that it stood out along with its un-Japanese surroundings, and undoubtedly has influenced many people who attended the Tokyo University of the Arts. It was about two westerners (well Istanbulites at the very least) seeing what Japanese think the western values uphold. This among many other things we saw across our travels explained so much about what inspires the Japanese culture. Incredible adoption of German cultural features in some cases, as well as an infatuation with things of the French nature. We even visited an Italian restaurant in Tokyo towards the end of our trip and I am glad we did. (more about that later :D)

Let’s enjoy the park from above

Even though our short visit was refreshing, we had spent quite some energy walking around. We still needed to sit and drink something, and found a rooftop restaurant in a building within the park (Ueno Seiyoken), after a long day the first Japanese beer was rewarding and made up for all the exhausting steps.

Erhan’s note: I remember checking google to find a decent restaurant nearby and not coming up with much given we were in the middle of the park. We walked into the building that we thought was a restaurant but had to climb up to the top floor to find it. There is something that gives you the butterflies about not being completely sure where you will end up, but the relief when you arrive in a welcoming place as often the case is in japan is completely worth it.

The meal wasn’t anything to write home about, but from up there you can see the entire park, all green with water lillies, and the rest of the metropolitan city scape; it was a special moment of us that marked the first excursion in Japan, first real day of our adventure.

Erhan’s note: And it had gone spectacularly well for a first day too. 😀

We decided to finish our day after the beer time and to walk straight to the hotel but we were intrigued to see our first gashapon and claw machines in the wild, to be frank they are quit tempting even though you know it’s nearly impossible to win something worthwhile.

We passed some busy streets while walking to the hotel, enjoyed our first evening stroll.

When we reached the hotel, since the room was too tiny and no window could be opened, it was a little difficult for us to sleep with the AC (and we were still adjusting to the Japan time).

Have you been to Ueno Park? Did you enjoy it too? Did you see the full bloom? Comment below, let us know more!

Did you know that Google maps keeps your walking history? We learned that recently, here is the crazy summary of our 10th July.

The next day is another Japanese famous place: Akihabara…

Erhan’s note: We woke up, took the comically tiny shower, and headed downstairs for breakfast. It was a combination of western/japanese sort of canned hotel breakfast type. They had little croissants, some miso soup, natto, rice, and some pickles on the buffet. First time having tasted natto (fermented sticky soybeans with a wet sock taste and consistency), I understood why people have different opinions on it.

Even though Erhan seemed to enjoy the taste of sticky wet sock, I was left a bit wanting after the breakfast. We googled our environment and decided to go to the Ueno Park: a great destination for the first day orientation. We grabbed our cameras and wandered out.

It is a big park with a lake in the middle covered by water lilies. Unfortunately, we had missed their bloom, but it was already beautiful, covering the entire lake there was a sea of green leaves. I couldn’t imagine how beautiful they would be in their bloom (maybe a goal for the next time?).

Mystery of the Konbini Onigiri

For lunch, we took our Onigiri (Japanese rice balls where there is a flavored filling inside) from the nearby Konbini (Japanese convenience stores, like 7eleven, Lawsons, Familymart). I already had a favorite one: Tuna Mayo. I wouldn’t think something so simple would be so delicious (oishii: a word for delicious we would often use for the entire trip). By the way, being new in Japan, this was already our second time tasting the store sold onigiri and we were struggling with the packaging. They all had this double plastic wrapping with the seaweed in between, so that the rice ball would not touch the seaweed (Nori) unless it is opened. The reason was simple, the nori would get soggy and stick to the rice ball immediately once you opened the package, so it had to be kept isolated. Once we learned how to slowly unwrap it and hold the nori in a way to pinch the rice ball so it wraps around it, it was no longer a frustrating mess of rice and seaweed mush.

To our surprise our walk in the park led to our first temple visit! Benten-do Temple.

Erhan’s note: We quickly learned that in Japan most parks have a shrine/temple or both given how the Japanese religious structure encompasses nature in a way. We further later learned that Japanese tend to build shrines everywhere nature or not. I had heard that some tourists experience Shrine Fatigue, a term which encompasses the disinterest they start feeling after visiting shrine after temple after shrine after temple. I was quite ok with it personally.

You may see from the photos how excited we were to come across it. The very thing we only saw in so many other photos was standing there in real life in front of us.

We went straight to the booth of temple where they sold charms and temple related things. We immediately bought our goshuincho (御朱印帳), the special book in which you collect goshuin (御朱印) (seal stamps that worshippers and visitors to Shinto shrines and Buddhist temples collect), and of course first goshuin was made there. Btw, you make a donation to take a goshuin, it’s normally around 300 yen, app. 3 dollars.

Erhan’s note: I think we learned about the goshuincho during our preparation phase. So we already knew we should purchase it the moment we saw it. The booklets are beautiful for the most part, covered with a silk weave stitched on the covers, a depiction of whatever makes that particular temple or shrine you bought it from famous. Some booklets are really nice and some are rather minimalistic. Later in our trip, we also learned that even though most touristic temples charge you a fee for a stamp and signature, local temples where tourists rarely go to do not ask for a fee. Some temples just leave pre-signed leaflets to put in between your booklet, and a donation box nearby.

In the temples and shrines you may also purchase fortunes,  boxes, wrappings, charms, inscriptions in any form or method you can imagine.

Erhan’s note: I think we should make an additional blog post covering temples and what you can find in them.

We were already impressed with the local people when we saw this man casually chatting with his friends while playing/feeding the birds, he was so natural and nonchalant about it, he didn’t even look at them.

Did I say it was a hot day? On the first day of our trip we had already experienced the famous humidity and heat of the Japanese summer. We started looking for some interior coolness.

And what a luck! we saw the banners for the “JOMON” exhibition, we wandered in excitedly.